Make you own lightweight-concrete beehives. The moulds come with simple and easy to follow instructions. Make beehives for your apiaries or to sell to other beekeepers, royalty-free. The moulds can produce well over 200 beehives and are easy to repair once they start to take strain. The specially designed shape and beehive components make life easier for the beekeeper, bee and manufacturer. Designed as one part tray-moulds, the moulding process is fast and easy - less than 3 hours work per hive. Our specially designed concrete mix and reinforcing guidelines achieve a structural lightweight-concrete of 17MPA or more. Using our mix-design you can make a beehive for as little as R300. The concrete components can be customised to include locking mechanisms, vents and additional features.

The Bee Bunka Moulds, are easy-to-use tools for making your own lightweight-concrete Langstroth style beehives. As-easy-as baking a cake; prepare the moulds, mix the materials, pour the concrete, let it cure and remove the parts.

With these low-tech moulding tolls you can make everlasting beehives off-grid, anywhere, cheaply and quickly.

Concrete is a cheap, durable and easy to use material. In recent years lightweight-concrete has become a common and sought-after building material, that is allowing the benefits of concrete to be applied in various products and fields. Lightweight-concrete is typically made using perlite, vermiculite, charcoal, hurds or polystyrene as an aggregate to replace stone. In this way the weight of the concrete can be substantially reduced, while increasing the insulation coefficient. Using these aggregates reduces the concrete's strength, although through research and years of experimentation we have designed a concrete mix and reinforcing system that achieves a structural-strength lightweight-concrete. The Bee Bunka Mould Set consists of a brood chamber, super chamber and lid mould. The moulds are made from high-impact and chemically-resistant thermo-formed plastic. The material and design is the result of over 3 years of testing, refinement and iteration - ensuring that the requirements of the bees, beekeeper , material and manufacturer are exceeded. The plastic comes away from the concrete perfectly every time, with some help from the specially engineered shape of each of the parts. The 3 moulds are all one-part-trays which means that they work in a similar way to moulds for ice-cubes or sand-castles.

You can sell the beehives, run experiments with them and simply use them to expand your apiaries. The Basic Set of moulds (1 lid, 1 brood-base, 1 super) will allow you to make a Bee Bunka - making supers one at a time. If you need to make hives quickly we suggest buying the Production Set, with 2 super moulds, to speed up your production. If you are in a hurry, and want to produce at a rate of a hive-a-day, three mould sets will be ideal.

We take orders via email or phone call - see contact details at the bottom of the page. We ship nationwide and internationally, working with a trusted local courier and an international forwarding agent to deliver moulds safely, quickly and affordably. 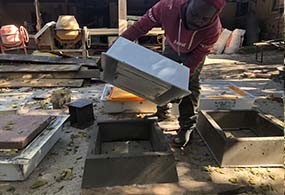 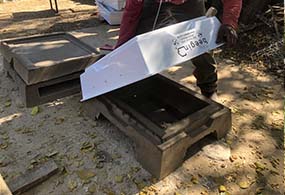 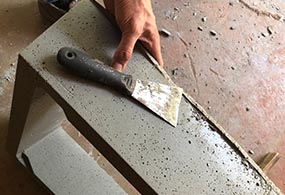 Good question, it is not as obvious as I would like it to be, but basically it all comes down to the brood chamber being 2 pieces. This was done to make the moulds smaller and easier to work with, and the individual parts of the hive to be smaller and lighter. A one piece concrete brood chamber was too heavy and difficult to mould in the end.

The basic mould set has 1 super so you have to cast a super for the brood chamber first and then a super again later using the one super mould. The basic set is perfect for making 10-20 hives over a few months. But if you really need to have a fast production, say for selling the hives, then the extra super is very helpful.

- How long does concrete last?

Concrete can last for thousands of years. The oldest known man-made concrete dates back to around 500 BCE.

How strong is lightweight-concrete vs. regular concrete?

Average concrete strength is about 3000psi (lbs/square inch). Some concrete can reach strengths over 20,000 psi. The mixture we advise is about 2000psi.

- How long does a mould last?

The plastic we use for the moulds is chemically resistant and our manufacturing process ensures easy demoulding. The moulds will last at least 200 castings (make 200 parts) if used correctly (handled with care & generous application of oil).

- How long does concrete take to set/cure?

Concrete sets in 48 hours, at which point it is often hard enough to be demoulded. Concrete reaches 70% of its strength in the first 7 days, and is fully cured after 28 days. If kept wet and cool for the first 2-7 days the strength of the concrete can be greatly improved.

- How much does it cost to make a concrete beehive?

About $35 or R400. Download our Instruction Manual (link above) for more details.

- What is the difference between a Basic Set and Production Set?

The Basic Set of moulds allows you to make all the parts for a Bee Bunka - brood base, super and lid. However, a Bee Bunka brood chamber is made by placing a super on top of the brood base. So the initial will make a brood chamber and a lid, then you will need to cast a super again later. The Production set comes with 2 super moulds, so that every-time you cast, you make a Bee Bunka with a complete brood chamber and one super. The difference is speed of production. Perlite and vermiculite are good insulators and have extremely high burn thresholds, which when added to concrete can create insulation and protection from extreme temperatures.